Riverside Elementary School opened in September 1968, approximately two weeks after the start of school on September 3. According to alumni Gary Morin, who was a sixth grader that year, the opening of our school was delayed because the building was still under construction. Mr. Morin’s mother was a volunteer at Riverside, and she helped set up our library. He adds, “The first students at Riverside came from Fort Hunt, Woodlawn, and Woodley Hills elementary schools. I remember music class. It was at the end of the hall in the front of the building, just a couple of doors down from the principal’s office. Our class helped plant the oak tree on the northeast corner of the building. Mrs. Somers was a teacher. Mr. Coins, our janitor, had one arm, but he did it all! Principal Herman Keith showed movies in the cafeteria as a present. He liked nature movies of the great outdoors. I loved the field days we had in June.”

Riverside Elementary School was designed by architect Allan J. Dickey. Our school originally had 24 classrooms and was built by the E. H. Glover Construction Company at a cost of $789,000. Our first principal was Herman Keith, Jr. He served from 1968 to 1980.

The period between 1975 and 1985 was a challenging time for Fairfax County Public Schools (FCPS). Student enrollment gradually declined during this decade resulting in the closure of several schools in the eastern part of Fairfax County. The closures affected neighborhoods that saw the earliest growth post-World War II. The children in these neighborhoods were graduating high school, and there were fewer families in the area with young children. Enrollment at Riverside fluctuated, but our school was not in danger of closure. In 1976, 436 students were enrolled at Riverside. That number jumped to 515 in 1978, fell to 366 in 1981, and rebounded to 420 by 1985. Our second principal, Charles P. Gray, came to Riverside from Wilton Woods Elementary School where he’d served as principal until that school closed in 1980.

Our third principal was John F. Spataro. He came to Riverside in the early 1980s and had previously served as the principal of Markham Elementary School on the Fort Belvoir military installation. During his principalship Riverside had its first addition. In 1987 the Golden Construction Company built a gymnasium and music room addition to our school at a cost of $680,331. Principal Spataro was succeeded in May 1990 by Janet K. Funk who served as principal until 1995 when she transferred to the newly opened Halley Elementary School. Our fifth principal was Olivia Michener. During her time at Riverside a second addition of six classrooms and a new state-of-the-art library were constructed. This addition began construction in 1996, and was contracted to Zadmer Enterprises, Inc. at a cost of $1.3 million.

A Glimpse Back in Time

In 1993, Riverside Elementary School was the subject of the Fairfax County Public Schools cable television channel series Profile. The Red Apple 21 crew spent several days at Riverside, gathering interviews with teachers and classroom footage. The resulting 25-minute documentary provides a fascinating snapshot of our school in the early 1990s.

At the beginning of the new millennium, Sandra O. Culmer became Riverside’s sixth principal. Culmer was the former principal of Rose Hill and Poplar Tree elementary schools and only served as our principal for one year before moving on to lead Willow Springs Elementary School. She was succeeded by our longest-serving principal to date, Lori J. Morton. Principal Morton arrived at Riverside in 2001 and two years later led our school through its first, extensive building-wide renewal and modernization. During her principalship, the Young Scholars program began and a Gifted and Talented Center (GT) opened at Riverside. The GT program was the forerunner of the Advanced Academic Program. 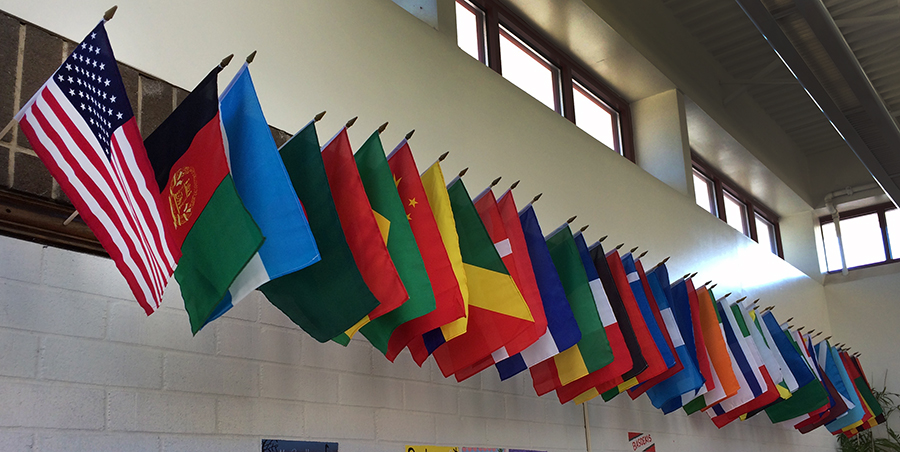 Riverside School is a beautiful sight

Its striking colors are red and white

A school that stands so proudly for all

It’s the one that beats them all

Aim for the sun!